Mini-Rant: What are Those Slooooow Left-Lane Drivers Thinking?

When I was driving nearly-weekly between Princeton and Boston, I would ponder - stew, usually - often thinking: “What the hell is that #@&#!% driver in front of me thinking?”  Consider here drivers who ride the left lane, not passing anyone, and generally moving at or below the speed limit … 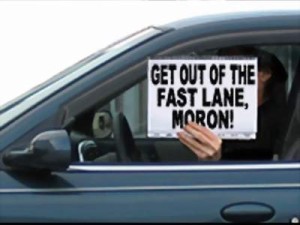 I came up with 3 major classes, each with sub-classes:

1. Never learned that cars should travel in the right-hand lane unless passing (napping during drivers ed..)

2. Learned and forgot In either case, these how is it possible that these folks never even get the hint from watching other drivers, or from the dirty looks given by people passing on their right?

B.  Distracted, Slooooow Left-Lane Drivers.  8 (probably infinite) sub-classes: These left lane riders know the rules, but are just not paying attention because they are …

1. Texting or talking on the phone (yes dear, I’ll be home in time for dinner with your mother [hey, another reason to drive slooooow] …)

2. Talking with people, imaginary friends or pets in the car

8. Engaged in some other unsavory or savory activities

…. Most of these folks (I’ve been there) are embarrassed when they realize they have a line of cars on their bumper or are being passed on the right. They either speed up or move to the right eventually.

C.  Purposefully-Slooooow Left-Lane Drivers.  4 sub-classes: I’m really way-out-there speculating on this one.  These winners know the rules, are completely alert to the world around them.  However, they …

2. Feel powerful exerting some control over the world around them

4. Simply do not give a hoot

There are probably other posts on this subject. However, I avoided searching for them because I wanted this rant to be unbiased. What do you think?  What have I missed? What percentage of left-lane riders fall into each class?  The list for why people drive below the speed limit on a single lane road must be quite similar.  OK, I feel better now that this is off my chest