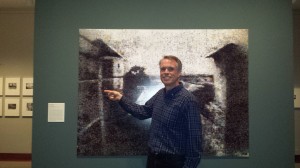 Pointing to tiny photo of Steve from 2001

My dear wife Amy, dear friend Julie and I paid our first visit to the wonderful Princeton University Museum of Art on December 31st.  And, in what has to be the most bizarre and serendipitous event (not in any way the most important event!) in my blessed life,  I found my ugly face in a work of art!

We came across the piece by artist Joan Fontcuberta titled “Googlegram: Niépce”.  The work uses 10s of thousands of images from the Web to form a representation of the  earliest surviving photograph, Nicéphore Niépce’s View from the Window at Le Gras (1826).

1. A tiny photo of me taken in 2001 while in Vienna was used (see above, where I point to the location, and below for an enlargement).   [read on]
2. The artwork happens to be in Princeton, the town to which we just moved, for a 3 month showing.
3. Somehow, very quickly and without my glasses, I spotted my tiny pic from among the 10s of thousands.
4. Upon exclaiming this fact, many others in the gallery came over, expressed similar amazement, and confirmed the sighting! 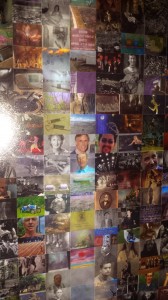 Steve’s pic in the middle of the vertical, lighter zone. Pic is at most 1×1 cm.

I communicated with the artist, and he says he has never had anyone identify his or her photo in one of his many Googlegrams.  He asked to use this story in his work. I, of course, agreed.