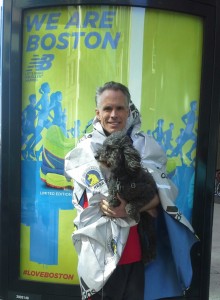 Steve and Milo at Finish of Marathon

I was the heaviest and in the least decent shape of any of the 20+ marathons I’ve run in the past 39 years. Nevertheless, I did some minimal training during our tough winter and planned to run 9 minute miles to just get through the beast. It was really great to get back to Boston and see many friends, including my old running buddies from the Winchester Highlanders. The daughter of a Highlander was running her first marathon with the intention of running a bit faster than my original plan. I suggested we try to keep each other on pace, and we did a pretty good job of it.

The day was very warm, sunny for runners, but super for spectators.  The spirit around this special Boston Marathon was strong, following last year’s bombings. Close to 1 million spectators cheered and beered, in support of over 32K runners (8K more than usual).  We finished faster than I had planned (see below); running the early miles a bit faster than the uphill, hot, later miles.  Overall, I was happy – very sore – but happy. 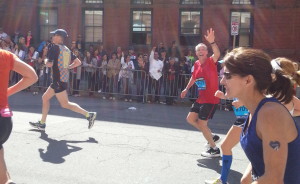 At mile 26 of the Boston Marathon 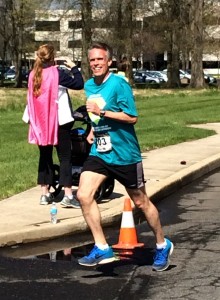 I was still sore by Wednesday last week, and could not walk down stairs without use of both railings.  However, by Friday I felt OK.  Which is good, since I committed to run with a team of work colleagues in the CASA 5K, to support abused and neglected children in the area.  Did the first mile in 7:20, and finished in 11th overall averaging 6:52s.  .. just a touch slower than last year (when I did not have the “benefit” of running a marathon 5 days earlier). The results for the CASA show a weird ordering of ages and times – not shocking for a small, local event.  A gorgeous day!